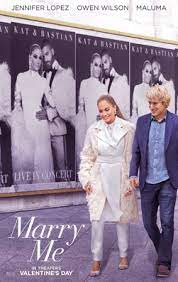 Starring famous faces such as Jennifer Lopez and Owen Wilson, Marry Me has joined the list of must watch rom-coms.

The story follows Kat Valdez (Jennifer Lopez) as she is about to get married to her fellow music star Bastian (Maluma) on stage. But when she finds out about her fiancé’s affair she marries a random stranger in the crowd—single dad and math teacher Charlie Gilbert (Owen Wilson).

The movie is available with a peacock subscription, or rental from apple, YouTube, vudu, and google play for six dollars.

The songs in this movie were written by John Debney and sung by Jennifer Lopez and Maluma. The soundtrack includes originals such as Marry Me, On My Way, and After Love—all three of which are integral to the story line.

Over the course of the movie both Kat and Charlie's lives were changed drastically, however in the end it was for the better.