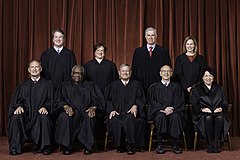 After years of fending off attacks claiming the Supreme Court was a partisan institution, six Supreme Court Justices decided to indulge their critics, handing down one of the most consequential and partisan rulings in the past half of a century—Dobbs v. Jackson Women’s Health organization.

In their ruling the Justices overturned Roe v. Wade and Planned Parenthood of Southeastern Pennsylvania v. Casey, two prior Supreme Court decisions that guaranteed a woman’s right to choose whether to obtain an abortion or not. Writing for the majority, Associate Justice Alito wrote “Roe was egregiously wrong from the start…It is time to heed the Constitution and return the issue of abortion to the people’s elected representatives.”

Now, each of the 50 states will have its own rules, regulations, and restrictions regarding abortion. With an average of 42% of people leaving the state in which they were born, McNary students will face a never ending stream of changing circumstances as they prepare to leave Oregon. However, this ruling stretches much further than simply allowing “the people’s elected representatives” to decide whether or not to permit abortion within that state.

It is no secret that these elected representatives no longer accurately represent their constituents' interests. In Kansas, a state where pro-life lawmakers control a two-thirds majority in both chambers of their legislature, an amendment that would strip the right to obtain an abortion failed with 59% of voters saying no to the amendment. Clearly, the legislators do not reflect the will of Kansas voters.

In their joint dissenting opinion, Associate Justices Breyer, Sotomayor, and Kagan wrote “Whatever the exact scope of the coming laws, one result of today’s decision is certain: the curtailment of women’s rights, and of their status as free and equal citizens.”

With three of the Supreme Court Justices having recently been appointed by a pro-life president who twice failed to win the popular vote, it is impossible to ignore the political connotations this decision has. All three of those Justices voted to overturn Roe v. Wade, making their appointments appear political thus undermining judicial legitimacy.

The concluding words of Justices Breyer, Sotomayor, and Kagan speak to the nature of this tragedy that the decision represents: “With sorrow—for this Court, but more, for the many millions of American women who have today lost a fundamental constitutional protection—we dissent.”

Students, staff and members of the community are encouraged to write letters to the editor to express their opinions. All letters must be signed by the author. No anonymous letters or those using assumed names will be published. The Piper can edit letters that are libelous, irresponsible, or in poor taste. Letters should not exceed 300 words in length.

Our staff will always act professionally, transparently, and ethically online. We ask that readers engage with our social media posts with decency, respect, and an understanding that The Piper Daily is a student laboratory for teaching journalism.