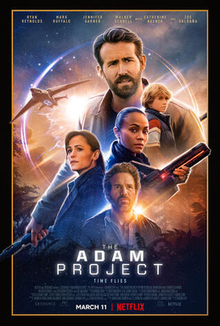 The Adam Project is a 2022 action movie featuring many famous faces, such as Ryan Reynolds, Mark Ruffalo, and Zoe Saldaña.

The story follows time-traveling fighter pilot Adam Reed (played by Ryan Reynolds) as he crash lands in the past and pairs up with his 12-year-old self ( played by Walker Scobell) to save the future.

The movie is full of witty interactions and fast action—perfect for a family movie night. With its classic action and adventure, The Adam Project is a breath of fresh air when compared to all the other serious action movies.

Adam Reed’s internal conflicts were revealed through the banter between the older and the younger versions of himself. This allowed a deeper impact of the character on the audience.

The interaction between the younger and older Adams and their father creates a relatable and emotional environment. This interaction has an aftertaste of closure because of how the two ages of Adam react and work with their father.

The movie is available through Netflix—perfect for a night of Netflix with the family.

Be warned that there is a risk of crying due to the emotional strain and the multiple reunions throughout.

This movie might not be the world breaking piece of the matrix, however, it definitely deserves a watch with your loved ones.