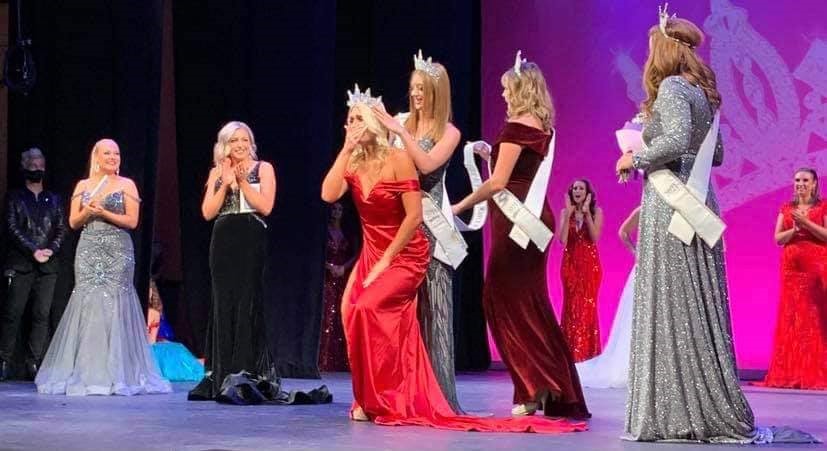 Who would've thought that a Facebook ad would be able to put someone through a whole new experience you could never forget?  Meet Sofia Boru, an instructional assistant here at McNary High School. Her whole new experience? Getting crowned Miss Oregon of USOA.

When Boru won Miss Oregon USA 2021, it was a lot to process.

“I was on cloud nine - it didn't feel quite real,” Boru said. The feeling of winning was so overwhelming she was crying tears of joy, and she was greeted with congratulations from her competitors.

“I was too busy hugging the rest of the other girls that I didn’t even know I was supposed to be getting crowned,” she said.

Boru has been doing pageants for four years, and now all her hard work has finally paid off. She was scrolling through FaceBook and found an advertisement for Miss Oregon USA, which she had competed for that title for 3 years.

This year she switched to the United States of America Pageant and won. When she won, it didn't feel real for her. She cried and her family cheered so loud everyone could hear them.

“It was something I always wanted to try," she said.

Ever since she was a junior at McNary she was keen on the idea of participating in being Junior Miss, but unfortunately she could not participate due to the lack of income she had growing up.

"I was raised by a single mom. I didn't grow up with money, nice things. I was always taught that if you want something bad enough you work hard,"  Boru said.

The process itself is not as easy as it looks. It would start on a Friday with dinner. The next day there would be interviewing and rehearsal, and one Sunday would be the final rehearsal and the show.

There were many steps required to make sure she was ready for the big show, including getting coached on the interview process, walking, and posing.

Most of the hair, and makeup is done by Boru herself. ”I wanted to feel more like myself,” she said.

“I'm on the fine line of natural and a little bit of glam. I feel like that’s my comfort level. I have done photoshoots where they go a whole nine yards and it's so much makeup that I had to wash my face three times to get everything off. It is painful, so that's not something I do for myself personally,” Boru said.

Many of the norms had to be changed and restricted due to Covid 19. The contestants were required to wear masks at all times and to be six feet away from each other. They even had to be escorted to wherever they wanted to go so that they wouldn’t get in contact with others. Even masks were in the “swag bags.”

Boru said everyone needs a break in life, which can get stressful and overwhelming. Finding ways to let go a little really helps out in the long run, she said. For example, Sofia's favorite stress reliever is hiking. Boru likes to go hiking because it gives herself a chance to breathe and remind herself she can power through her struggles.

She loves camping, kayaking, and especially paddle boarding. She considers herself a “sun baby.”

“I really love going out when I reach that summit and just looking over the view. Just taking that deep breath and being like ‘okay if I can do this seven mile hike at 3000 feet elevation, and I've been here all day, I know that I can tackle the next thing,’ ’she said.

“Juggling social life, work, family time, it does get overwhelming,” she said.

It seems like that pageant will never be able to escape its horrible stereotype of the skinny blonde girl with blue eyes is going to win. Boru was able to debunk that statement.

The contest is never about physical beauty at all, more about personality, she said. Anyone can win. Once a transgender woman even won a pageant, she said.

Overall, the pageant community is pretty good, she said. The contestants would cheer each other on during the show. They would admire the pretty gowns they were wearing and share many compliments.

Unfortunately, Boru and many others have noticed the toxic femininity going around the community. Women degrade other women but that’s not what this is all about, Boru said.

“We want to empower and inspire women,'' she said.

"You won't run into someone who is stuck up and thinks that they're better than you,"  she said.

But her main focus is helping people who have suffered from domestic violence.

"I know a number of strong women who have had to endure, and even men, who have endured domestic violence," she said.

She is still advocating for the victims of domestic violence even outside of the pageant world.

Boru couldn't do pageants without the support of her idol - her mother.

“I was raised by a single mom. I didn't grow up with money, nice things. I was always taught that if you want something bad enough, you work hard and be determined enough to get it yourself. It's not just going to be handed to you,” Boru said .

She is done having that topic stay in the shadows and seen as an ugly conversation. She had spoken about how domestic violence rates have gone up which broke her heart to see and hear.

“It is not just women. It is men, it is transgender people, it is the LGBTQ community, it is everybody, everyone is effected by it,” Boru said .

What’s to come next for Miss Oregon? Boru loves her job as a special education instructional assistant, and while advocating for the victims of domestic violence, she is also thinking about going back to school to become a special education teacher.

“I made a connection with a student and I fell in love,” Boru said, talking about her first day in McNary’s high school’s DLC classroom. She was subbing almost seven years ago and doing general education until she walked into McNary’s learning center and it only took one day for her to know that’s what she really enjoyed doing.

Font club, is it a font or a club?

The staff of The Piper Daily wish you a joyous Thanksgiving!

WOU performs "The Secret in the Wings"

Art sketches of the hand