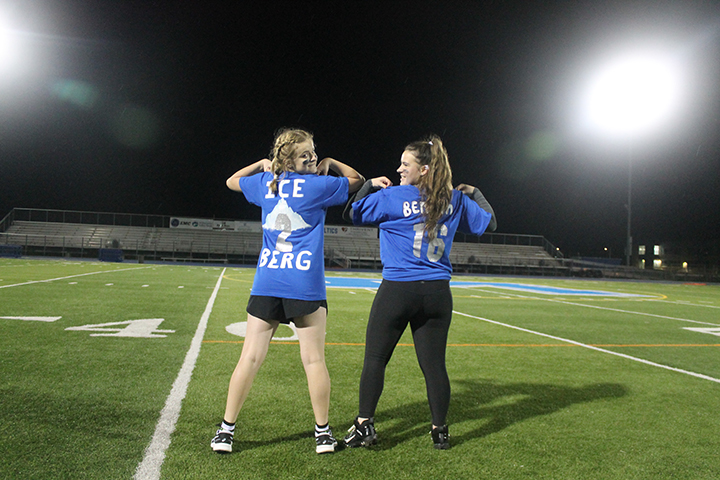 This once a year football game is played by McNary’s female juniors and seniors. During the game on the field, the student section got a view of the male cheerleaders, also known as Manleaders, that perform cheers and a memorable half-time dance out on the track.

This annual football game is a fundraiser for supplies for the McNary Science Department.

The game began with the National Anthem, sung by McNary senior Ellie Auvinen. Once the game had officially kicked off, the juniors were on the ball, but not for a long time. In the first few moments of the game, the seniors intercepted the ball.

Lilly Purkey made the first touchdown at the 6 minute mark, and the seniors took the lead for the first half of the game. The seniors were getting close on scoring touchdowns multiple times throughout the first half,  but the junior’s strong defense didn't let that happen.

“It felt great! The adrenaline is pumping,” said Jade Gardner, one of the players for the juniors who had made multiple touchdowns for the junior team.

At the end of the first half, the juniors had the lead with a score of 7-0. After the battle on the field, the Man Leaders danced to the song ‘Single Ladies' by Beyonce. The Man Leaders were coached by 4 cheerleaders: Kiele Jarnagin- a junior, Celia Lopez- a senior, Piper Nelson- a senior, and Kaylen Lewis- a senior.

“Amazing,” said Aiden Wilson, one of the junior manleaders on the squad. He was very excited to be a part of the manleading team.

“I honestly felt I did the best I could,” said Yared Calderon, who played for the seniors.

The second half began as the seniors took control of the ball, but they didn’t remain in possession. The juniors gained the ball back and scored a touchdown at 12 minutes with a successful kick by Purkey. It didn't take them long to score their third touchdown at 11:51 by Jade Gardner, who caught an interception and ran for the endzone.

The seniors got a touchdown and an interception in the second half, but it wasn't enough to take the win.

As the Juniors celebrate, the senior team is proud of what they did and accomplished during this game. The manleaders, after an exciting victory, whip out one last cheer to celebrate. The audience will agree, it was a great game to watch.

“It was an enthusiastic experience, we gave everything we had,” said Stephanie Wade, one of the senior ladies on the powderpuff team.