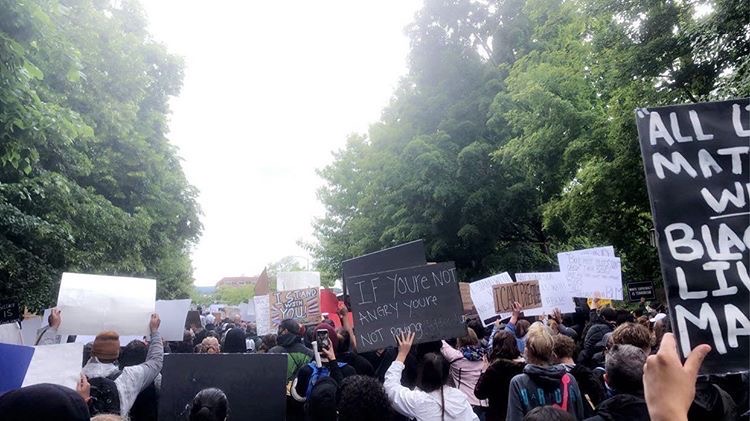 The protest was one of many around the country, calling for racial equality and justice following the murder of George Floyd.

Justice Robinett, a former McNary graduate, was one of many who took to the streets to protest. “What I want to see is that the outcry of voices in my community is heard and respected,” Robinett said.

“I want people to be able to freely express their thoughts, and to eliminate the grounds for people to think or commit ignorant, bigoted, and racist acts, and to do it through education.”

“The outcry is clear and peoples voices are being heard,” he said.” Progress will be slow and I think it’s important that people not take that progress for granted, so that way we can move forward as a society.”

While the protest had remained peaceful, police had begun proposing curfews for the protesters.

“I honestly think it breeds the grounds for more violence by dictating when protestors can express their first amendment rights,” Robinett said.

“It really seems like at least in Salem, that the police try and dictate when protests end when it isn’t their place to do so, and they do that with tear gas and excessive force which turns peaceful protesters to act violently in return.” he said.

Another former McNary alumni, Natasvha Antes, attended the protest as well. “I see racial bias used in school systems, police, the judicial system, hiring practices and every aspect of the community,” Antes said.

“There has been so much positive change since the protests began, such as NASCAR banning the confederate flag, and Breonna’s law being passed which will regulate no knock warrants. Michigan also passed a bill that would require mental health screenings and implicit bias training,” she said. “While there’s still so much more to be done, we’ve made a great step in the right direction.”

“Anyone fighting for change needs to remember to vote. Nothing we do will matter if we don’t vote; and If you can’t vote, tell someone who can to vote,” Antes said.