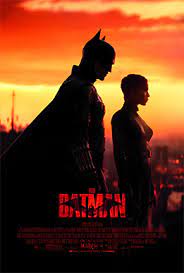 One of DC comics most famous heroes has hit the screen with a new gritty reboot. The Batman with Robert Pattinson playing Bruce Wayne was in theaters now and has been getting a lot of buzz.  Historically the Batman Movies have been one of the more profitable heroes for the DC franchise.

This rugged reboot's main antagonist is a serial killer focused on exposing the secrets of Gothams highest class. This Batman movie is different from the Batman movies made previously, because we were not given an origin story of Bruce Wayne. In this movie we are put right into the timeline of this Batman's story, as we open to a Gotham already struck with fear that the Batman is lurking in the shadows ready to strike down criminals.

The Bruce Wayne seen in this batman is much different from those in previous movies. Robert Pattinson's Bruce Wayne is secluded from his city and is rarely seen by the media and important Gotham political figures. With a Bruce Wayne that the audience was given in this movie it does not make sense for the movie to focus much on the bruce wayne aspect of things.

The interactions seen in this movie perfectly set up villains and situations for future movies. Though in my opinion the third act of this movie was slightly stretched out as it creates many possibilities for subsequent Batman movies in a way that is not forced.